Working with a huge amount of geographic data is not an easy task. We decided to split the job with cluster technology. By using Docker, we were able to process petabytes of data or serve self-hosted world maps in 10 minutes. And our solution based on Docker technology made it to the DockerCon conference.

When a company is considering using a map, the first option taken into consideration is mostly one of the big free map providers. This is what most people know and what they consider as free: in fact, it is always paid — either by the user’s personal data or, when it comes to extensive usage by an organization, by a significant amount of money. They are billed for using maps offline, behind the firewall, assets tracking or simply if the number of visitors jumped higher. All those limitations can be avoided with self-hosted maps.

In OpenMapTiles, we offer you world maps based on OpenStreetMap. This collaborative mapping project includes all important infrastructure for a base map like streets, houses, roads, landuse data, points of interest and much more. On top of this, the paid customers also get access to digital elevation model and contour lines for building outdoor maps and satellite imagery of the whole world. You can also add your own geodata and use the same map style to customize its’ look.

OpenMapTiles Server, which enables you to run all of this from your own infrastructure, is using Docker container technology. The hardware requirements are so low so you can run it even on your laptop. There is also no need to be connected to the internet, therefore the maps can be used offline or behind the firewall. The OpenMapTiles project is open-source, the community-driven repository can be found on GitHub.

The OpenMapTiles Server is available in Docker hub or, if you already have Docker installed, by launching the container from Kitematic or running this command:

Then visit the webpage http://localhost:8080/ in your browser and you will be guided through the short wizard, where you select if you want to serve the whole planet, a country or a city, which of the prepared map style you want to use or if you want to use your own, default language for the visitors, what kind of services you want to run (raster tiles, vector tiles, WMTS, WMS or static maps).

As said before, the hardware requirement are really low: pre-generated vector tiles of the whole world have just some 50 GB, therefore the minimal requirement is set to 60 GB hard drive space and 8 GB RAM. If you want to have raster tiles, you will need more space as raster images occupy more space. Serving pre-rendered tiles has an advantage in lower hardware requirements compared to serving tiles on demand, where you need to run your own PostgreSQL, Nginx, and others. Also, the configuration is significantly easier and setting up the server is a task for a person with basic IT knowledge.

Map of the entire world can run on a computer with 60 GB hard drive space and 8 GB RAM.

The solution based on OpenMapTiles Server is fully scalable (horizontally + vertically); the scaling could be done dynamically based on the workload. Scaling requires Map Server, Memserver and volume attached, which enables multiplying the machines. You can achieve the same result using Swarm / Kubernetes.

The whole technique of processing big geodata can be split on a cluster using Docker container technology.

Our solution starts with dividing the whole work into smaller jobs and sending it to the separate machines. Each of them is constantly reporting metrics and logs to the master server. Once the job is marked as done, finished work is sent to the output storage, the control server sends another work and the whole process starts again. The input and output storage can be anything from own server to cloud services like Amazon S3 or Google Cloud Storage.

With the process described above, we were able to render the whole world OpenStreetMap data with OpenMapTiles project (126 million tiles) during one day using 32 machines, each equipped with 4 cores. This job will otherwise take ~128 days of CPU time. The same technique was used for rendering raster data using our MapTiler Cluster. By using a cluster, we were able to convert 60 TB USA aerial imagery, create OMT Satellite or process petabytes of satellite data for clients. 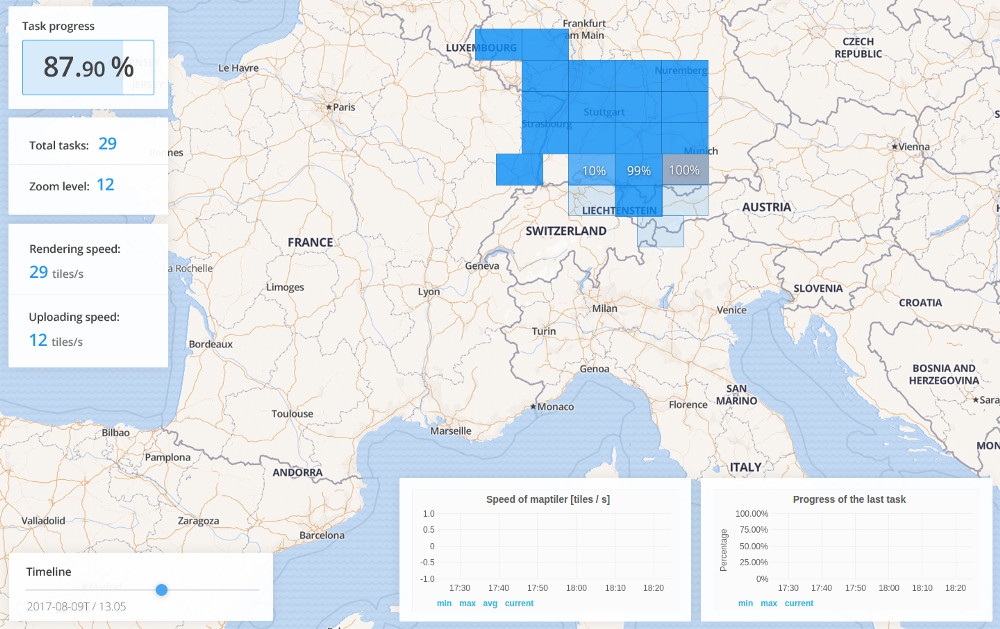 If you want to learn more, check the video from our presentation which is available on Docker page or YouTube. And do not forget to view the slides at Slideshare.